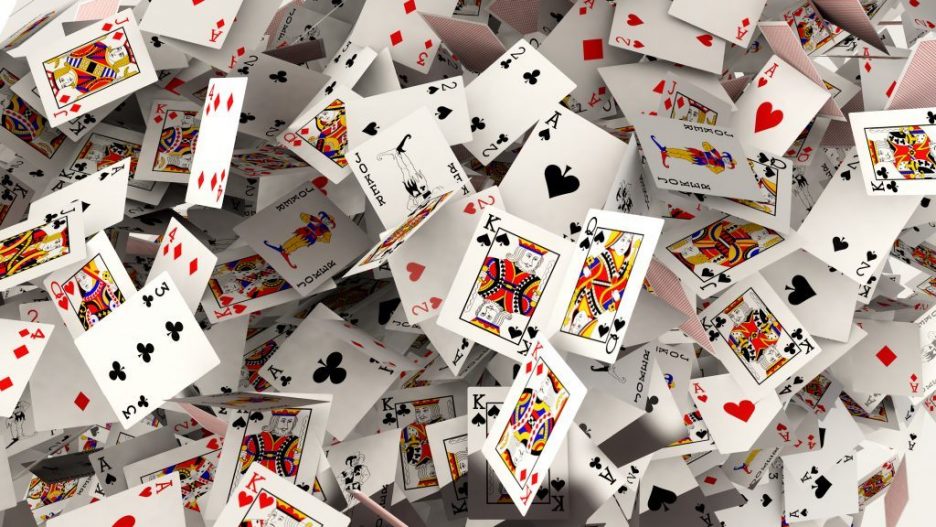 If you’re a master card
player, or even just a casual one, then a deck of cards is obviously the most
important tool of your trade.

But how often do you
think about the cards themselves rather than the game?

We take a closer look
at what they are, where they originated from, and why they are the way they are.

Keep reading to find
out some of the most surprising facts about playing cards.

1. There’s Actually A Reason Why There Are 52 Cards In A Deck

Ever wondered why there are 52 cards in a deck? Well, it hasn’t always been that way.

Over the centuries,
decks have comprised of different card variations of 24, 36, 40, 48 and almost
any number in between.

But 52 stole a march on
the rest of the, er, pack to become the most popular and common deck size
across large portions of the globe.

Nobody can say for sure
what the reason for this is.

There are many competing theories, but it’s most likely that British and French colonialism played a huge part, as it potentially allowed the standard French deck size of 52 cards to spread across the world.

An interesting theory on why there are 52 cards in a deck is that the number of cards corresponds to the number of weeks within a year.

Some say that the two colors
— red and black — reflect day and night, and that the four suits represent the
four seasons.

It gets even freakier
when you notice that there are 13 cards in a suit to match the number of lunar
cycles, and 12 court cards that represent the 12 months of the year.

2. The First Card Decks
Were Invented In A Surprising Location

Think you know where
packs of cards first came from? Maybe think again.

Decks of cards actually originated in China in the 9th century. Or at least that’s what most scholars agree on.

The common belief is
that the first printed playing cards originated in China too, in the form of a
32-card domino deck printed on paper, bone and wood.

It’s believed cards
then slowly spread across India, Persia and Egypt before arriving in Europe,
allowing for all kinds of variations.

3. Vegas Casinos Change
Decks More Than You Change Your Pants 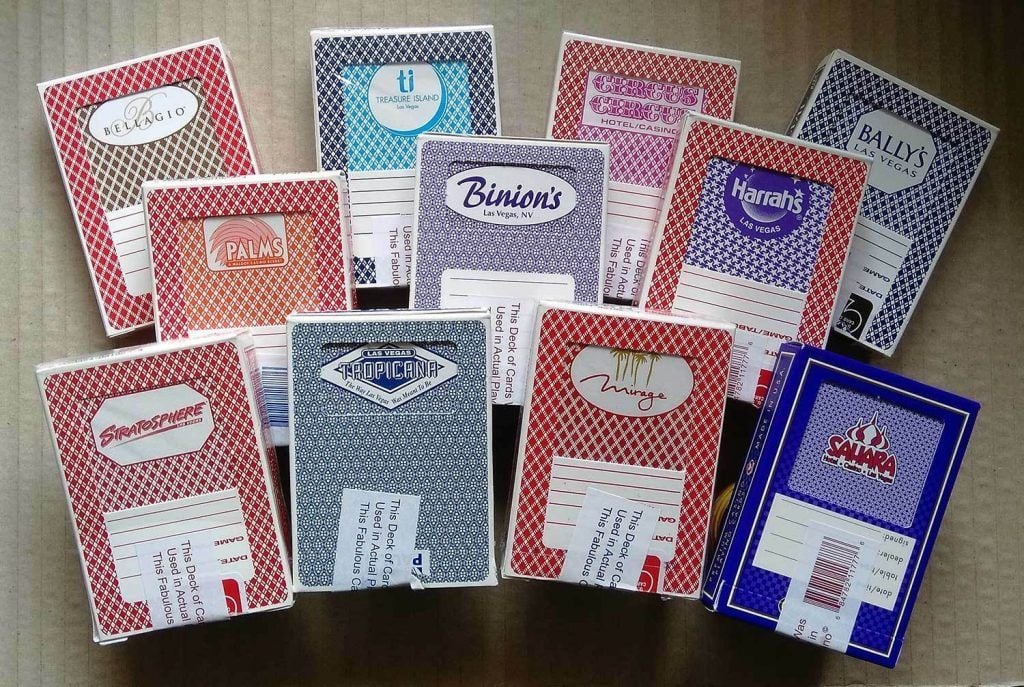 Ever wondered how long decks of cards are used in casinos before they’re thrown away?

In Las Vegas, decks can last for up to 12 hours before being discarded or sold.

How long a deck is in play depends on factors such as how busy the specific table is and whether shuffling is done by hand or machine.

For example, if you visit during a busy time, a deck can last as little as one hour before being switched for a fresh pack.

But why are cards retired in the first place?

That’s to stop any distinguishing marks, such as bends and scuffs, giving the game away to players looking to gain an advantage.

4. The World’s Oldest Deck Of Cards Is In NYC

The world’s rarest and supposedly oldest full deck of cards is on show at The Metropolitan Museum of Art in New York.

The hand-painted tarot
deck hails from mid-15th century Netherlands and is in amazing condition, suggesting
the cards were hardly played. 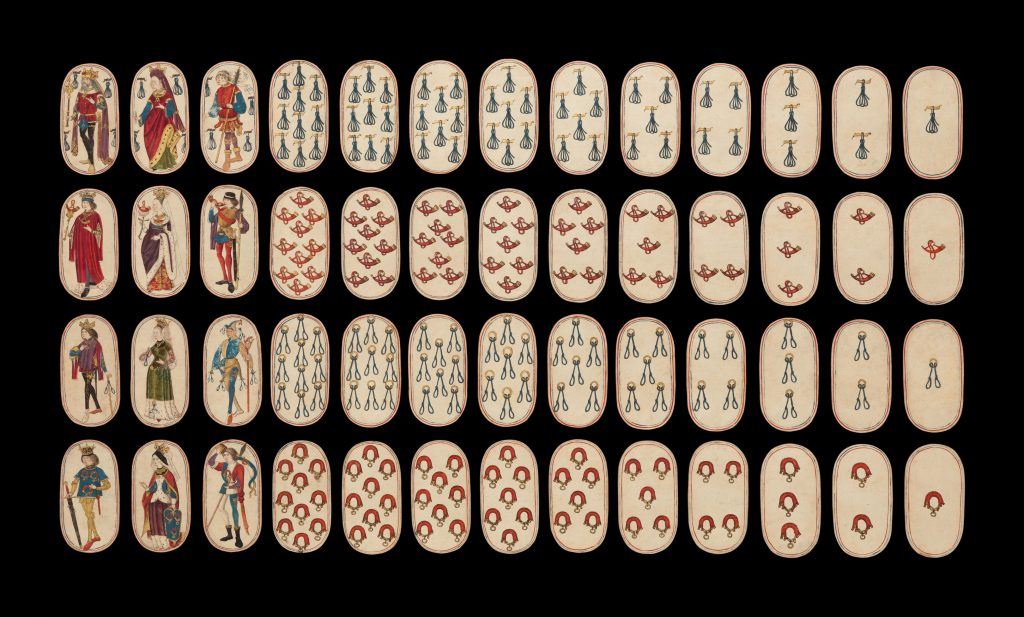 Image: The Metropolitan Museum of Art

You’ll find other centuries-old decks of cards being held at institutions like Yale University, who even have their own card database.

Competing cards for the
title of oldest and rarest include the Mamluk pack of cards at Topkapu Museum
in Istanbul.

As we mentioned
earlier, any imperfections in a pack of cards can give away plenty to
eagle-eyed players. This means casino cards have a lot of security measures in
place.

This includes larger symbols and characters so that any suspicious occurrences can be caught by security cameras.

New decks also have to be signed-off by pit bosses and dealers, before being reshuffled.

And when a pack of
cards is finally retired, every card must be accounted for before being either
shredded or sold with intentional imperfections so that they can’t find their
way back to the casino.

If you play with a ‘traditional’
deck of 52 ‘French’ cards, created from the 16th century onwards, some faces
may look familiar.

That’s because some are
based on or inspired by famous figures from history.

Peek a little closer and you might just see Julius Caesar as the King of Diamonds, Alexander the Great as the King of Clubs, Greek goddess Pallas Athena as the Queen of Spades, or Lancelot du Lac as the Jack of Clubs.

7. Cards Aren’t Always
What They Seem

During war time,
governments can get pretty creative with playing cards.

Our best example of
this is the US government, who worked with a famous card company during World
War II to make special secret decks for American prisoners of war (POWs).

The cards would apparently peel apart when wet to reveal snippets of maps to assist with escapes. 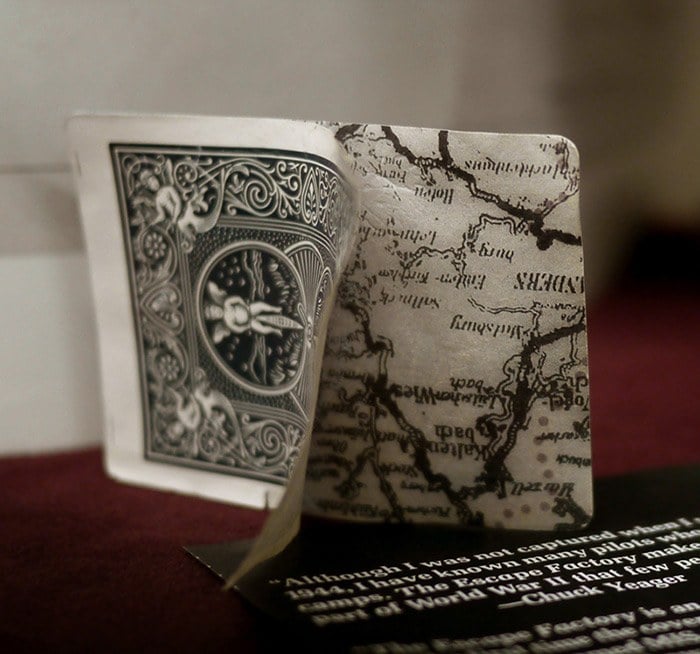 8. The Most Famous Cards Are From The US

Again, it’s all a matter of opinion, but it’s widely regarded that the most iconic card decks are the US brand Bicycle.

These are tipped to be
the most famous pack of cards ever due to their history of being used to help
American prisoners escape during World War II, as we mentioned above.

The cards also feature in popular culture when it comes to the Vietnam War too, as a myth did the rounds that American soldiers used the Ace of Spades cards to scare away superstitious Viet Cong members.

Nowadays you’re more
likely to find them at casinos and magic shows.

9. One Card Manufacturer
Dominates The Market

The United States Playing Card Company (USPCC) are said to be the biggest manufacturer of playing cards in the world, and a top choice for many casinos.

Recognize any of these brands: Aviator, Bee, Tally-Ho?

They’re all made by the USPCC, as well as those famous (or infamous) Bicycle cards we mentioned earlier.

The Belgian company Cartamundi also posts a rival claim to be the largest card manufacturer in the world. But they make many varieties of card games in different markets than the USPCC.

10. Cards Are Made of
Plastic For Casino Security

When it comes to decks
of casino cards, you may notice they feel a little different. That’s because
they are 100% plastic.

Plastic allows more card-handling for games like poker, before they get tired, dirty and dog-eared.

And, since we spoke of security before, it also makes it harder for players to cheat and mark cards than paper.

We just hope in the present day, that cards are recycled rather than the plastic thrown away.

For more similar content, find out how one woman is leading the way with the first ever gender-neutral playing cards.