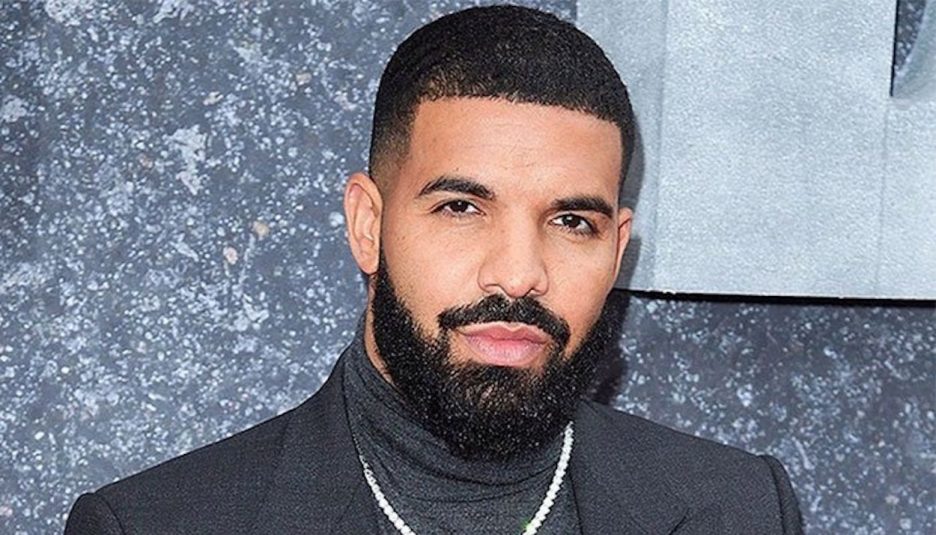 Since the
release of his first album, ‘Thank Me Later’ in 2010, Canadian rapper Drake has
become a household name.

However, the “6 God”, as he is known, has been making waves in the online gambling industry since becoming an official ambassador for the online cryptocurrency casino, Stake.com.

Here at Casino.org, we wanted to get a full picture of Drake’s extraordinary gambling habits. We analyzed his biggest sports and casino wagers from the first seven months of the year.

We compared the total amount risked against the potential payout and calculated his most successful wins (as well as his most devastating losses).

A Brief History Of His Biggest Bets

From January to July 2022, our research discovered 16 notable wins and eight notable losses.

This includes wagers on American leagues like the NFL and NBA and on international sports like the UFC and Formula 1.

It also includes his wagers on Stake.com, where it’s clear he has a penchant for roulette.

Some of his biggest successes occurred during live-streamed events as part of his partnership with Stake.

In fact, a single spin on a live roulette table saw him win over $17 million in May.

Excluding
an eight-figure casino failure (when he lost just under $25 million with
French Montana), all of Drake’s biggest losses since January have been from
his various sports wagers.

Despite his
failures, the Toronto native totalled over $62.42 million in wins in
seven months.

Take away
the $26.77 million in losses, and Drake headed into August with more
than $35.66 million in profits.

In this blog, we take a more detailed look at Drake’s biggest wagers on Stake. 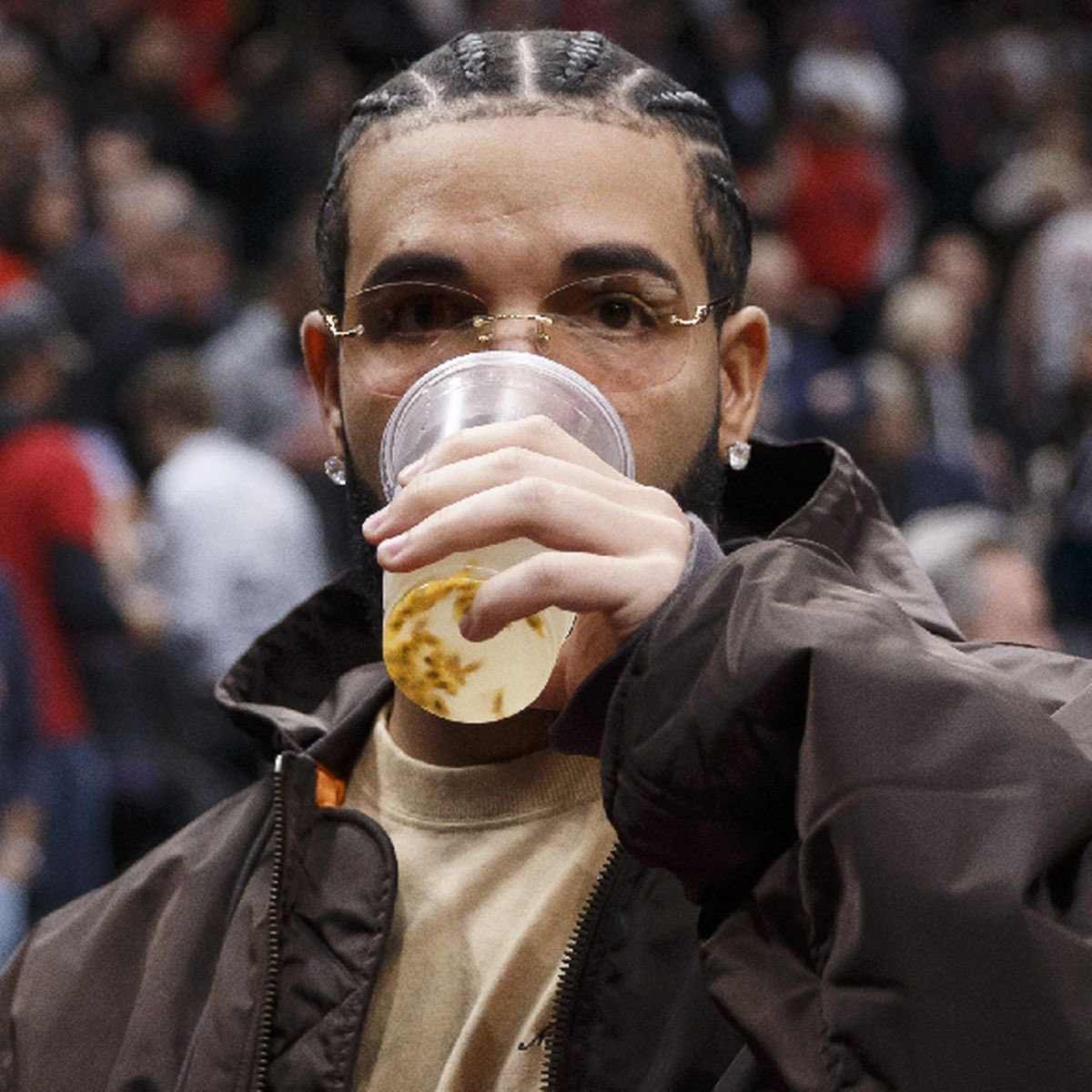 Drake joined the crypto casino under the username “DeepPockets6” in December 2021.

In just two months, he wagered cryptocurrency worth over $1 billion on various sports and casino bets.

The
Toronto talent has never been shy about posting his gambling activity. In
February 2022, he shared a snap of himself playing live high-stakes roulette
while courtside at a Toronto Raptors game.

Since
Drake’s first foray into the crypto betting world, Stake has been tagged or had
its logo appear in almost all of the rapper’s gambling-related posts.

Unsurprisingly,
the logo featured in his post about the Raptors, for whom the rapper has been a
global ambassador since 2013.

While
many fans expressed concern over Drake’s newfound gambling habits, other
eagle-eyed viewers claimed it was simply product placement.

The last time we looked into Drake’s excessive gambling habits, rumors had begun to spread that a potential Drake-Stake partnership was brewing. Less than two weeks later, Drake announced his affiliation with the crypto casino in March 2022.

The
announcement, which Drake deemed “inevitable”, was posted to his Instagram
(@champagnepapi) on March 2.

The
rapper wrote in the caption that part of this partnership would be a
live-streamed event where he could dish out prizes and share the love “with my
people”.

Any bettor who keeps up with high-profile sports wagers will be well aware of the ‘Drake Curse’.

Far from the fabled King Midas, conspiracists believe that everything Drake touches turns to loss.

From Anthony Joshua to Serena Williams, any athlete endorsed or wagered on by Drake seems to suffer a shocking defeat.

The ‘Drake Curse’ is such legendary sporting folklore that analysts have crunched the numbers to see if it’s true (the myth was debunked with only 31% of associated players losing their matches, but who’s to get in the way of a good story?).

Since
joining Stake, Drake has upped the ante and added jet fuel to the fire.

Whether
it’s due to a passion for the sport or because Stake is the official partner in
Asia and Latin America, Drake has funneled millions of dollars into wagering on
the UFC.

In March,
the Canadian star missed a $1.03 million payout after betting $275,000 that
Jorge Masvidal would defeat Colby Covington.

The rapper lost another $1 million payout in May when he wagered $427,000 on Justin Gaethje to beat Charles Oliveira.

Things took a turn for the better on July 1, and it seemed the curse was momentarily lifted. 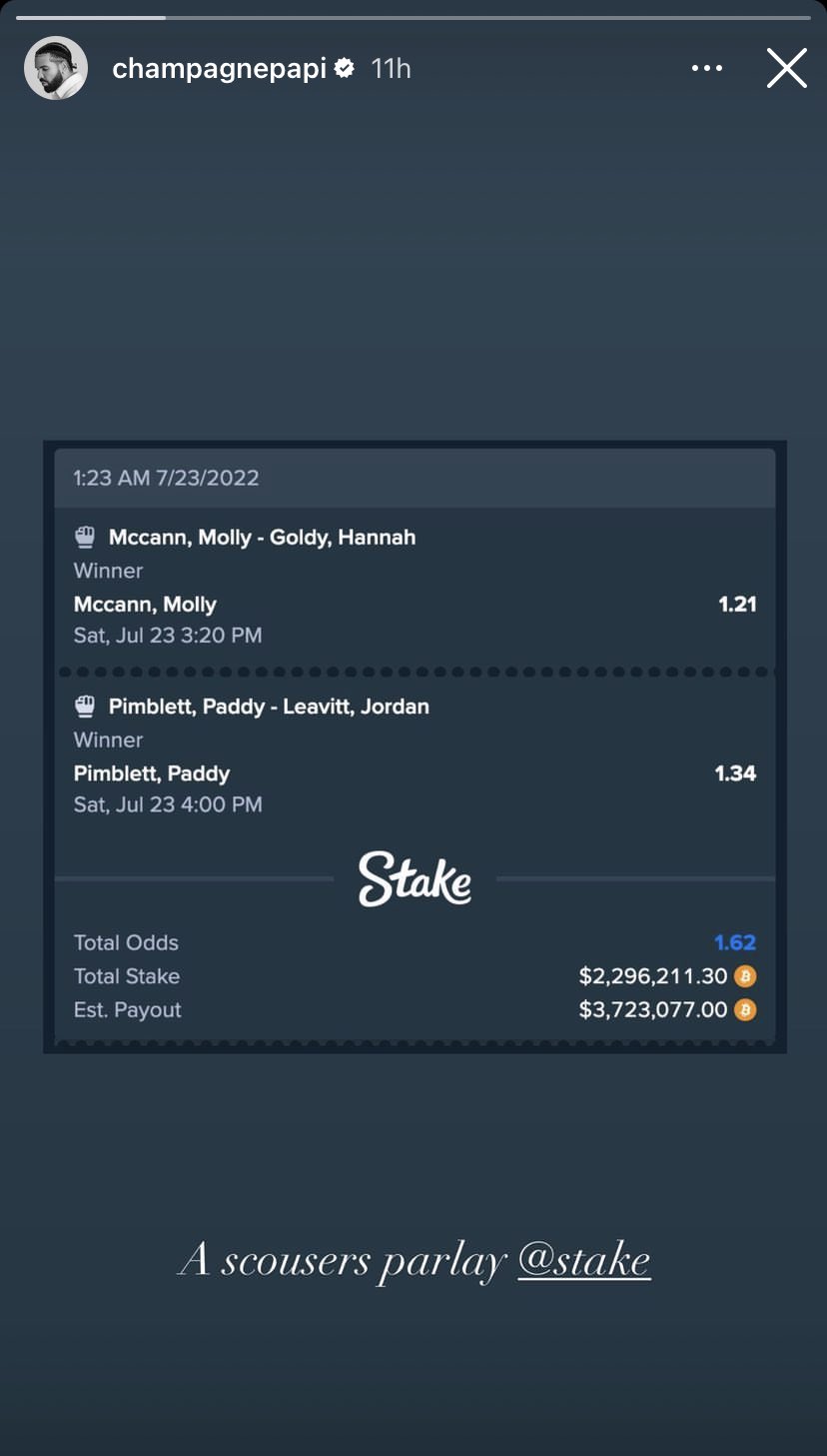 Drake
bought them both a Rolex watch as a token of his gratitude.

However,
his luck ended abruptly in August, and he lost two consecutive bets totaling
$430,00 on UFC fighters Kamaru Usman and Jose Aldo.

While Drake may have tallied more losses than wins from his UFC bets, the “6 God” has had a better run when wagering on the NFL.

In
February, he took home $537,850 by betting on the Rams to win and on Odell
Beckham Jr. to score an anytime touchdown.

Though
he lost $393,000 on a separate ODJ prop bet, he recovered $235,000 in April by
betting on his Californian namesake Drake London to be the 1st
drafted Wide Receiver.

Shortly before his bet on London in April, Drake’s NBA bets on the Golden State Warriors and Dallas Mavericks saw him taking home a combined total of $729,440.

The
same month, he bet on the Toronto Blue Jays to beat the Boston Red Sox and
pocketed a respectable $115,240.

This huge payout couldn’t have come at a better time, as he lost $235,000 only six days later by betting on Formula 1 racer Charles Leclerc to win the Spain Grand Prix. 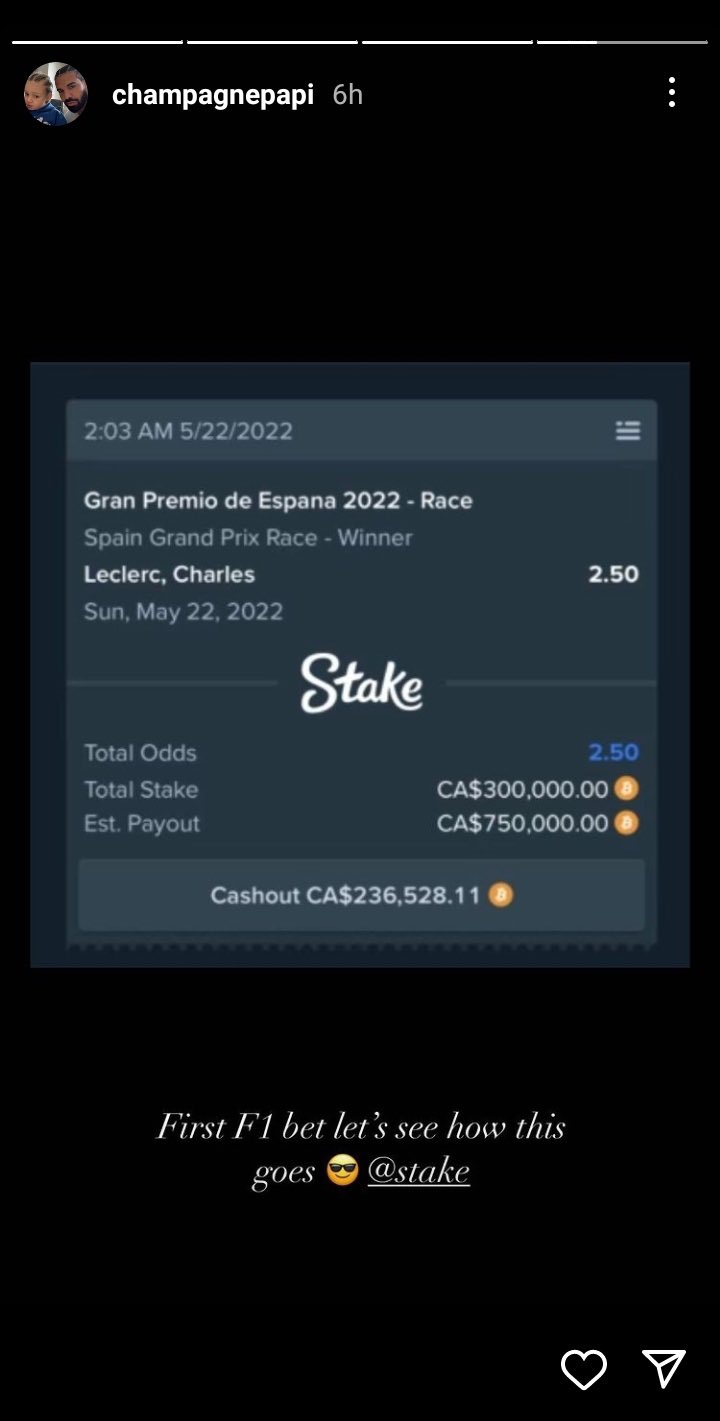 Clearly,
the odds tip more in Drake’s favor when he bets on star-spangled soil.

In June, Drake’s former NHL favorites let him down after he wagered $225,292 on a Rangers victory.

However, a swift change in tactics, a jump to the Colorado Avalanches and a $228,270 profit covered the losses of the day before.

Fortunately
for the OVO entrepreneur, his decision to stick with the Golden State Warriors
proved successful. Two strategic wagers on the Warriors resulted in a $1
million combined payout from the $225,292 and $111,620 stakes.

Stake
is a site that values its casino just as much as its sportsbook, and Drake is
the same.

Alongside
placing six- and seven-figure sports wagers, the rapper is renowned for
splashing big bucks on red and black.

A week
before he announced his partnership with Stake, Drake was pictured wagering
over $100,000 on a single spin at an ARIA Casino high-stakes roulette table. 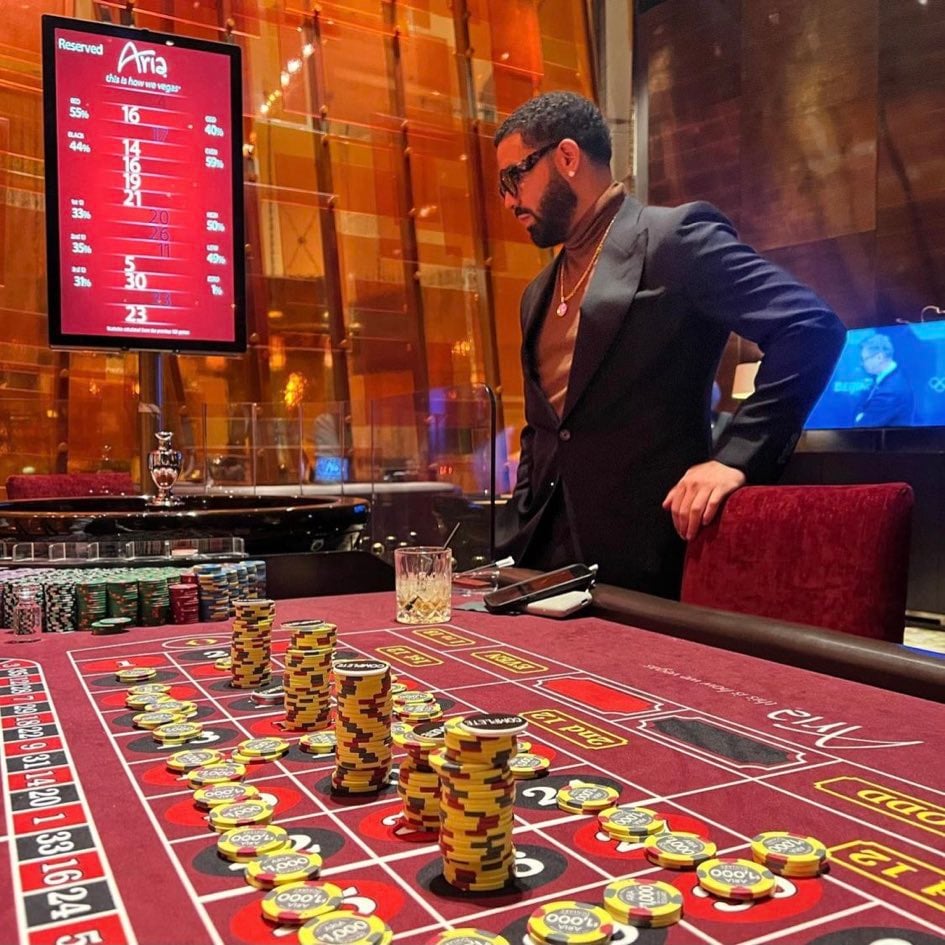 Since joining Stake, Drake has wagered, lost, and won some astronomical casino bets.

Rather
than spinning the reels of the latest slots
or beating the dealer to 21, the Toronto rapper focuses his time (and enormous
bankroll) on roulette.

He shared a video of the win on his Instagram story with the caption, “I’m a savant… nothing sweeter than a repeater.”

Drake
is set to host a number of live streamed events as part of his partnership with
the crypto casino.

Dubbed
“Drake Vs Stake”, these events give Stake players from around the world
exclusive access to Drake’s own live roulette gameplay.

Alongside scoring himself some significant wins, the rapper hands out Bitcoin packages worth $75,000 to players throughout the stream.

There have been two “Drake Vs Stake” events so far, with around $1 million worth of crypto awarded each time. 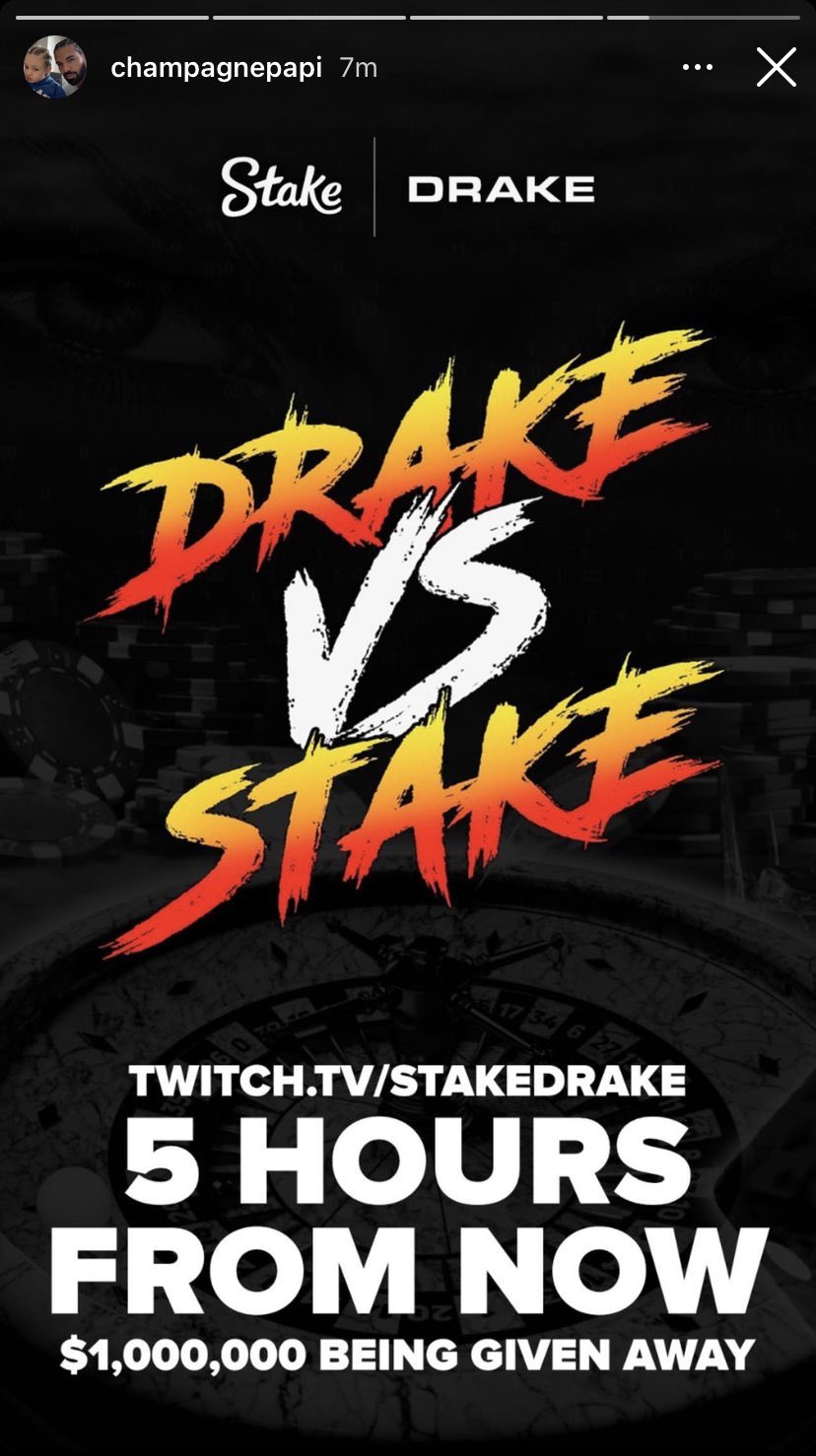 Whether
he’s wagering live with other streamers on Twitch or playing alongside his celebrity
rapper pals, the Canadian gambling mogul has multiple million-dollar wins
under his belt.

Celebrity
guests often join Drake during his “Drake Vs Stake” events. The first
live-streamed Twitch event, which took place on May 26, saw Drake surrounded by
an entourage while he wagered $500,000 per spin on a live roulette table.

Moments
before his guest and fellow rapper Lil Baby entered the room, Drake won a
mammoth $17.9 million on his lucky number, black 11.

On July 11, French Montana joined Drake for the second instalment of “Drake Vs Stake”. The rapper scored two more eight-figure wins, which amounted to an incredible $24.9 million.

Throughout
the stream, Drake dished out another $1 million worth of Bitcoin between the
100,000 Stake members following the event.

While the winnings of his two streamed casino events amount to more than all of his successful sports wagers combined, it seems he hasn’t yet perfected the art of knowing when to cash out.

Despite starting with $8.5 million and reaching almost $27.2 million at one point, he ended the second event with less than $2,000 in his account.

Before
Drake officially announced his partnership with Stake, people were questioning
whether or not the multi-platinum-award winner was being paid to promote the
site.

After
Drake confirmed the partnership, the focus shifted towards a different line of
questioning.

Many
bettors now believe that the money Drake gambles on the site is in fact
deposited by Stake itself.

Some
claim he can make such high-risk bets because he is not risking his own money.

Whether
or not this is true is yet to be discovered; however, with a net worth of a
quarter of a billion, it’s not unreasonable to think he has the bankroll to
fund such outrageous betting habits.

Alongside
associations with Drake and the UFC, Stake has global partnerships that are
helping launch the crypto casino into the mainstream.

Stake
took its first foray into the UK market in 2022. Besides opening a dedicated
site for UK bettors under a new handle, Stake is the official front-of-shirt
sponsor for both Everton and Watford FC.

It
also signed former Manchester City striker Sergio Agüero as a brand ambassador
in February 2022 and became the shirt sleeve sponsor for Peterborough’s
Emirates FA Cup 5th Round match in the same month. 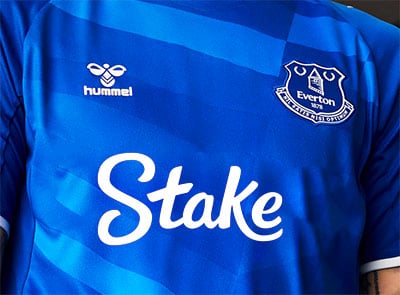 In Japan, Stake signed a deal with Volleyball World to become the official sponsor of the International Volleyball Federation’s men’s league in Osaka, Japan.