Find out if social media really has had an impact on the success of Eurovision winners over the years!

From the likes of ABBA to Celine Dion, there is no doubt that Eurovision has produced some of the most iconic superstars the world has ever seen. Not only has the song contest been ranked among the world’s most-watched events every year but it has also become more popular on social media.

Recent winners of the show have benefited greatly in the digital era from the publicity that the platform provides. In addition, many contestants have gone on to amass ground-breaking numbers of followers on social media, and have gone viral with content, or forged successful careers despite the fact they didn’t even win.

This leaves us wondering, what exactly constitutes success on social media for these Eurovision winners – is it their power to remain relevant, their overall popularity with fans or their estimated net worth? Let’s find out…

To gain more insight, the team at PlayOJO have gathered data on Eurovision winners from 2006 to 2021, taking into account the number of monthly listeners on Spotify from when it was first created till now. The research was based on each winner’s social media channels and the number of Spotify followers, as well as their net worth.

Which Eurovision winner had the highest social media following?

Crowned the 2021 winners at the show’s 65th anniversary, Måneskin took the world by storm with their winning song ‘Zitti e buoni’.

Despite the underwhelming points they received from the jury, the Italian rock band snagged their win with an impressive 524 points after capturing the hearts of the viewers. As a result of Måneskin’s sensational performance, Italy saw its first victory in 31 years. Now known all across the globe, the group has also gone on to win eight awards outside of their Eurovision journey.

There is no doubt that the global stage of the Eurovision contest has not only thrust the group into the spotlight but has subsequently boosted their social media followings. After four years of active use on Instagram, the band was already by far the most followed 2021 contestants before the main event even took place.

This suggests that maybe the group’s success with Instagram engagement comes solely as a result of their consistency on social media. That being said, the group have still benefited greatly since receiving the iconic glass microphone trophy and now have a grand total of 5.98 million followers on Instagram as well as 5.4 million TikTok followers, which is a real testament to their likeability.

Arguably, however, the group’s rise to stardom and popularity on social media is as much a product of their Eurovision victory as it is their controversial antics. The band’s lead singer, Damiano David, went viral after a YouTube video of him allegedly taking a substance at the Eurovision show surfaced, which caused a massive scandal.

Upon speculation, it could be argued that the accusations caused by this scandal helped drive the group’s relevance on social media. After all, they were trending on Twitter before being announced as the official winners on the grounds of their lead singer’s suspicious behaviour.

Anyhow, regardless of their controversies, the band now has 22.9 million followers across their social media platforms, highly suggesting that their popularity has played a key role in why they remain relevant today.

The talented quartet also had the opportunity to perform at Coachella this year. Therefore, it is no wonder they’ve achieved an outstanding 5.8 million followers and 19.9 million monthly listeners on Spotify. It is evident that the group of four Italian rock stars have succeeded as the most popular Eurovision winners both on Spotify and social media.

Which Eurovision winner had the lowest social media following?

After their victory at the Eurovision contest in 2011, the ‘Running Scared’ singers, Ell and Nikki, dwindled away from the spotlight, choosing a more private life than most other winners. The couple’s lack of social media interaction seemed to have affected their relevance on social media as the duo received the lowest number of online followers of only 1,203 Spotify followers and 102 Deezer fans.

However, it could be argued that the reason for the pair’s lack of social media presence was due to the scrutiny of fans who weren’t too fond of the pair’s choice of song at the finals. One reviewer stated; ‘Running Scared is a bland and forgettable ballad with some kitschy and also cliché lyrics about love.’

Whilst another reviewer found the couple’s achievement to be ‘the most undeserved Eurovision win ever. An incredibly boring song that was out of tune… What can I say… As much as I want to say something positive… the staging was ok? No, no, no… I am still highly surprised by the voting.’

Despite the negativity towards the duo’s controversial win, because of their romantic ballad, Azerbaijan had the honour of bringing home the country’s first win for the first time in Eurovision history.

The pair still receive 17,840 monthly listeners on Spotify and have a decent net worth of $1.5 million, similar to other Eurovision winners such as Emmelie de Forest, who had the same net worth yet had thousands more social media followers. This implies that maybe social media might not be as important to the success of Eurovision artists as we think. 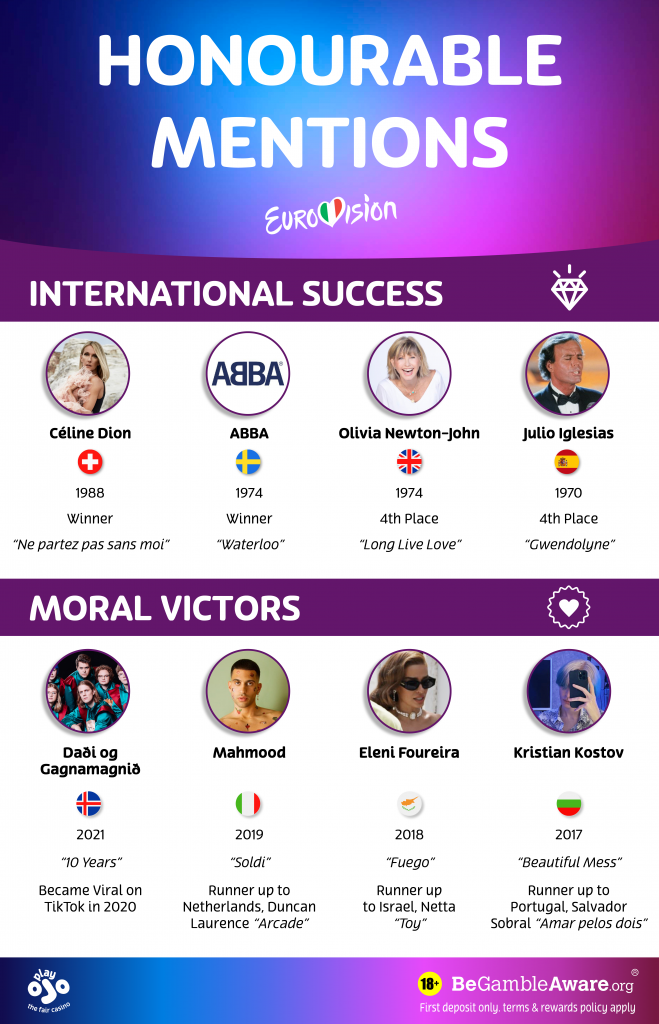 Eurovision winners with the highest net worth

Younger generations may be surprised to hear of Eurovision veterans from yesteryear. For example, there was Olivia Newton-John, who didn’t win the competition and instead became a worldwide superstar thanks to Grease. Obviously, her fame was cemented in an era that was pre-social media, which goes to show that celebrities and fame can be acquired without having social media channels to engage with fans.

Other contestants such as Katie Price (yes, you heard right) who also didn’t win Eurovision managed to stay relevant and profited greatly from social media platforms, which were only just emerging into the mainstream at the time.

Though we now know that you don’t need to win Eurovision to ensure you’ll go on to achieve success, this still implies that popularity is the main factor that can positively influence net worth. But is this really true?

Here are Eurovision winners with the highest net worth since 2006:

Swedish singer, Måns Zelmerlöw took home the trophy back in 2015 following the performance of his now five times Platinum song, ‘Heroes’. After securing 77.99% of the maximum possible points awarded at the competition, his success today comes as no surprise. Following his achievement, the legendary artist now has a net worth of a staggering $10 million, though he “only” has a total of 1.1 million social media followers.‘Hard Rock Hallelujah’ singers, Lordi, became the first Finnish rock band to triumph at the Eurovision contest. Despite all the opposition and backlash they received, which consisted of many spiteful comments critiquing their alternative outfits, the band won by a landslide with 292 points. The 2006 winners had an estimated net worth of $6 million, which is a testament to their half a million Spotify listeners (505,097) and their 911,512 total social media followers.The 2010 winner, Lena, gave Germany their second victory after 28 years with her ‘Satellite’ performance. The singer has gone on to achieve various degrees of success, including eight awards won outside of Eurovision and around eight million followers in total across all her social media accounts. With her 2.23 million monthly listeners on Spotify and 4.67 million Instagram followers, it’s no wonder the singer’s net worth amounts to an estimated $5 million.

So what impact have social media and streaming platforms had on Eurovision winners?

So, sorry to burst your bubble, but it seems the number of social media followers doesn’t always correlate to an increase in net worth. However, we can conclude that Eurovision has provided a space for many artists to thrive and acts as a great platform for artists to launch their careers. Likewise, social media definitely plays a big role in the long-lasting success of some of these winners though not always the pinnacle of their success.