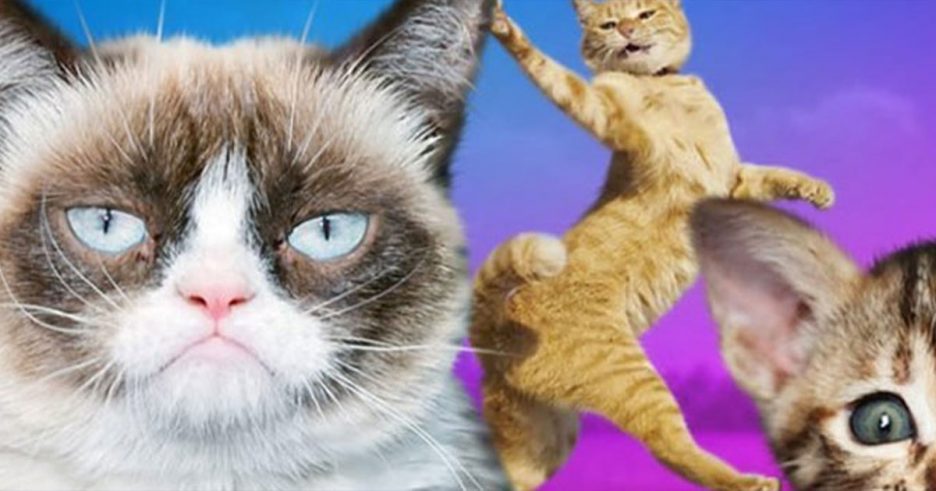 It’s CAT-MAAASSSSS! Well, not quite, but it’s International Cat Day, a day for cat lovers to celebrate everything they love about cats. We’d all love to live in a world where Santa Paws slides down our chimney once a year to deliver us a shiny new kitten to play with but, sadly, life’s not fair. However, we can still make the most of International Cat Day and what better way to celebrate cats than by sitting back and enjoying the best and most-watched cat videos the internet has to offer.

Clips of cats getting up to mischief have taken YouTube by storm in recent years, so we’ve tracked down 10 of the most-viewed vids to fulfill your feline fix – and we’ve also thrown in a few fun cat facts for good measure. What a purrr-fect treat – enjoy!

What do you get when you cross a group of curious cats with an innocent lobster just trying to mind its own business? A whole load of confusion and a wet mess, as well as one of the most-watched cat videos on YouTube!

If cats were eligible for the Oscars, this film would have cleaned up – although we would’ve gone with the name 28 Strays Later!

Cats pretty much have the perfect lives, whiling away their days sleeping, eating and chasing mice without a care in the world – what could be better than that? Erm, how about having £7 million?! That’s how much Blackie inherited in 1988 when his millionaire owner passed away and left his family out of his will, instead leaving his fortune to his beloved pet. You could buy a lot of catnip with that!

The only way cats could be even better is if we could talk to them. But this chatty pair don’t need humans – they’re too busy having a natter between themselves!

Looks like someone woke up on the wrong side of the cat bed! Cats are generally quite chilled out but this feisty little feline could give the Incredible Hulk a run for his money.

We all know Isaac Newton as the guy that developed the theory of gravity, but rumour has it he’s also responsible for the invention of the cat flap. While studying light and colour in his blacked-out attic back in the day, Newton’s cat would innocently nudge the door open, interrupting his research. Instead of locking his furry friend out of the room, the mathematician cut a hole in the bottom of the door and covered it with felt, allowing the cat to come and go as it pleased.

If this isn’t the cutest thing you’ve ever seen then you’re going to have to prove it. Just look at the little guy’s face! We could watch this all day and we recommend you do as well.

There’s nothing quite like a mother’s love and this little kitty certainly agrees. Wow, the cuteness is off the scale today – there’s no surprise that this is one of the internet’s most-watched cat videos!

Let’s be honest, who wouldn’t be interested in seeing an animal version of the Olympics? We’re not sure many cats would be up for swimming or cycling, but they’d excel out on the track. Cats are deceptively quick and can hit a top speed of 30mph, which is fast enough to beat Usain Bolt’s world-record 100 metre time. Zoom, zoom, zoom!

Move over Mozart, there’s a new pianist in town. We’re not convinced this cat is quite aware what’s going on, but it’s very entertaining all the same.

It’s well known that the Ancient Egyptians worshipped cats and an Alaskan town echoed that sentiment by (sort of) putting one in charge. An orange tabby cat named Stubbs was the mayor of Talkeetna for 20 years until he died in 2017. Sadly, as it was an honorary position, Stubbs held no actual power so couldn’t enact his paw-licies, but he was loved by the people of the town all the same. Cat power!

They say if you go long enough without a bath, even the fleas will leave you alone – and that’s clearly a motto this cat lives by. Nooooo!

Flick open any copy of the Guinness World Records and you’ll find pages and pages of fascinating cat records, from oldest and tallest to the cat with the longest tail. What you won’t find, however, is an official record for the world’s fattest cat. While it would be amusing to see, the record organisers don’t want to encourage people to overfeed their cats.

9. Supercat to the Rescue!

Is it a bird? Is it a plane? No, it’s Supercat! Dogs may be known as man’s best friend but they’re the villain here. Luckily, this little kid’s furry friend was on hand to save the day.

Sometimes, the simplest videos are the best. We’re not quite sure what this cat is looking at and from the look on its face, we’re not sure we want to!

While we all wish cats could stick around forever, they only live for around 14 years on average, which makes it even more remarkable that Kitty, the oldest cat to ever give birth, had kittens at the age of 30. For reference, if we convert her age to ‘cat years’, that’s the equivalent of a human having a baby aged 136. Good for you, Kitty!