The WSOP has been awarding bracelets to the winners for decades now, and if you’ve ever wanted to know why, who makes them, or how much they’re worth then you’re in the right place.

We’ll cover
everything you need to know, including whether you can get your hands on one
without actually winning a World Series of Poker event.

Where The Idea Of WSOP Bracelets Came From

When the World
Series of Poker first kicked off in 1970, winners weren’t awarded bracelets.
Instead, they got a cup and a fairly common-looking plaque.

It was a nice
trophy to have, but it wasn’t unique in any way.

Then, in 1976 Benny Binion – the man who came up with the WSOP concept – thought of the idea to start awarding bracelets instead.

Benny figured
that introducing bracelets for tournament winners would help set the game apart
and make it different.

Additionally,
bracelets were something players could actually wear while playing, so their
competitors could see they were up against a WSOP champion.

Albeit somewhat
unusual, the concept was well-received by the players at the time and WSOP
bracelets were adopted for the years to come.

During those
initial years, the number of bracelets awarded every year was fairly small.

However, as time
progressed and poker became more and more popular, the number of
bracelet-awarding events increased as well.

How Much Is A WSOP Bracelet Worth?

The World Series
of Poker bracelets are probably the most coveted trophies in the poker
community, so it’s hard to put a fixed value on them.

As well as this,
over the years the design of bracelets has changed quite a bit, and so has its
monetary value.

The first
bracelet that Benny Binion came up with in 1976 was worth around $500.

For the sake of
discussion, it’s worth mentioning that $500 was worth quite a bit more back
then than it is now.

The WSOP bracelets of today look quite different, and the ones awarded in most events are probably worth around $1,500.

This is not
accounting for the bracelet’s sentimental value or prestige but simply looking
at the value of materials used to make them.

However, not all
WSOP bracelets are created equal.

Bracelets awarded for the Main Event winners are much more valuable and much flashier.

Year after year, they’ve become nicer and more expensive, really setting them apart from all other bracelets.

Some of the
modern Main Event bracelets have been estimated to be worth hundreds of
thousands based on the value of the materials and the design.

These WSOP
bracelets contain gold and precious stones, making them fairly expensive pieces
of jewelry. But we’ll get back to that in a minute.

Can You Buy A WSOP Bracelet – And For How Much? 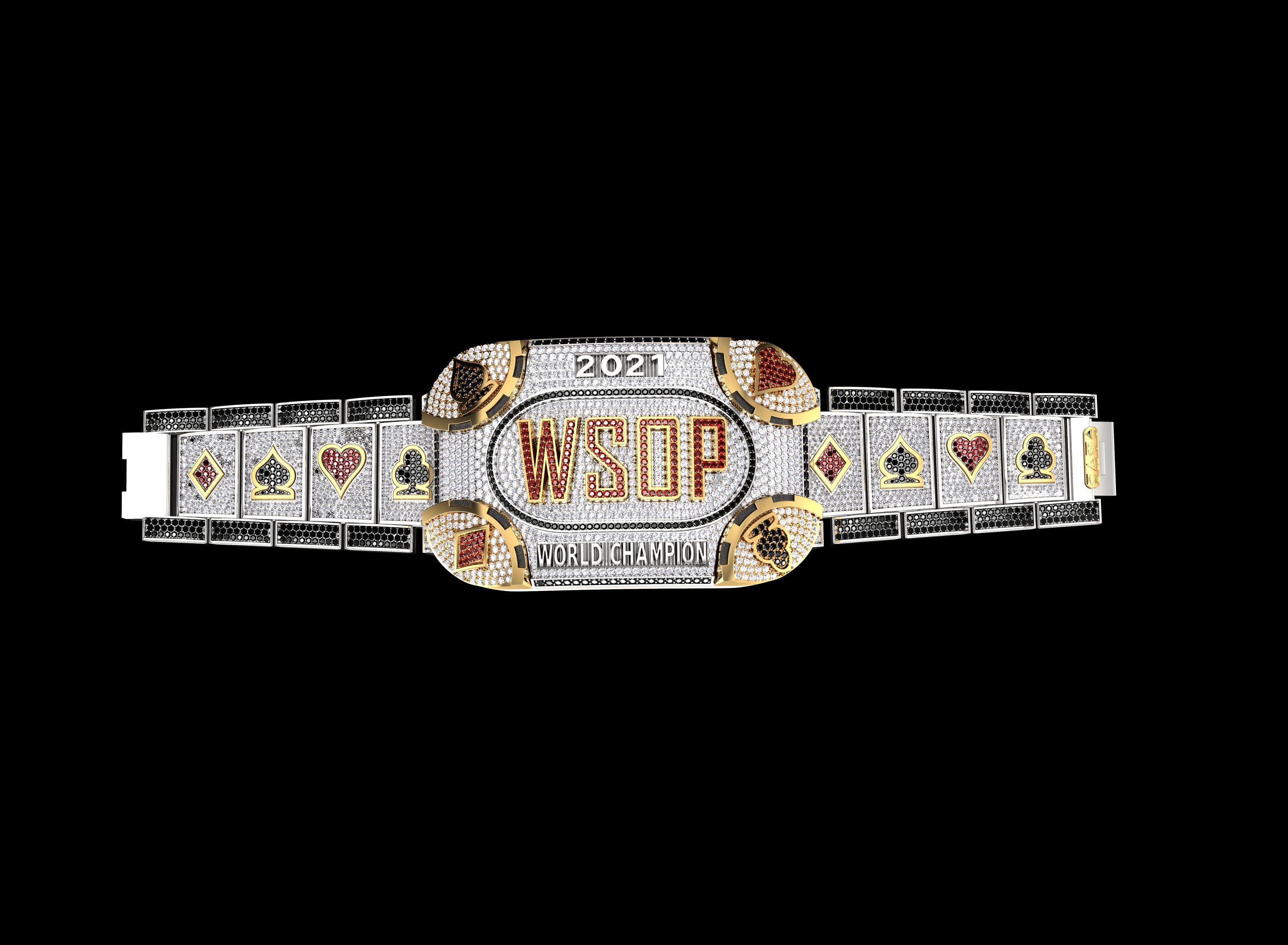 When it comes to sports memorabilia, the value of an item often doesn’t have much to do with its physical value.

Usually, it comes
down to what someone is willing to pay for it, and over the years, there have
been several examples of WSOP bracelets being bought and sold online.

Perhaps the most
famous case of a WSOP bracelet being put up for sale happened in 2013.

In that year, the 2006 Main Event bracelet popped up on an auction site. It was the largest Main Event in history that was won by Jamie Gold, who banked $12 million for his efforts.

The bracelet was
eventually sold for more than $65,000, but later on, Gold went on record to say
he had nothing to do with the auction, and it was out of his hands. He said
that if it were up to him, he’d never give up on it.

Another fairly notorious WSOP bracelet auction happened in 2010, when Peter Eastgate, another Main Event winner, put up his bracelet for sale.

Unlike Gold,
Eastgate was happy to sell his bracelet, with all proceeds going to charity. It
went for $147,500 and the money went to UNICEF.

But, not all
bracelets sold on eBay reached five-figure amounts. For example, TJ Cloutier
sold his 2005 Hold’em bracelet for a mere $2,500.

All in all, WSOP
bracelets pop up on eBay and other sales sites from time to time.

How much you’ll
have to pay for one will depend on how much interest there is. You can probably
get your hands on a “regular” bracelet for a few thousand dollars.

It’s also worth
noting that the number of bracelet-awarding events has been growing every year,
so there are more and more bracelets floating out there.

This is to say
that we could see an increased number of WSOP bracelets sold online in the
years to come.

With more of them being available, average prices might drop down as well, so don’t be surprised if you see one of them with a starting price of just a few hundred.

If you take a look at discussions on Reddit, you’ll see there’s a lot of debate surrounding their worth, which shows that it’s hard to pin a value on a bracelet.

If you check out
a WSOP bracelet, especially the ones awarded for Main Events and other major
tournaments such as Players Championship or Big One for One Drop, you’ll notice
that they’re fine-crafted pieces of jewelry.

There’s quite a
bit of work that goes into making them.

So, who actually
makes these WSOP bracelets?

Over the years,
the World Series of Poker has worked with several companies, each of them
putting their own touch into crafting the finest and most-coveted poker jewelry
to attract players from all over the world.

In recent years, the WSOP has been working with a company called Jostens to design and create bracelets for the tournaments.

They were the
ones behind the 2019 Main Event bracelet, which was very special, as this was
the year the Series was celebrating its 50th anniversary. 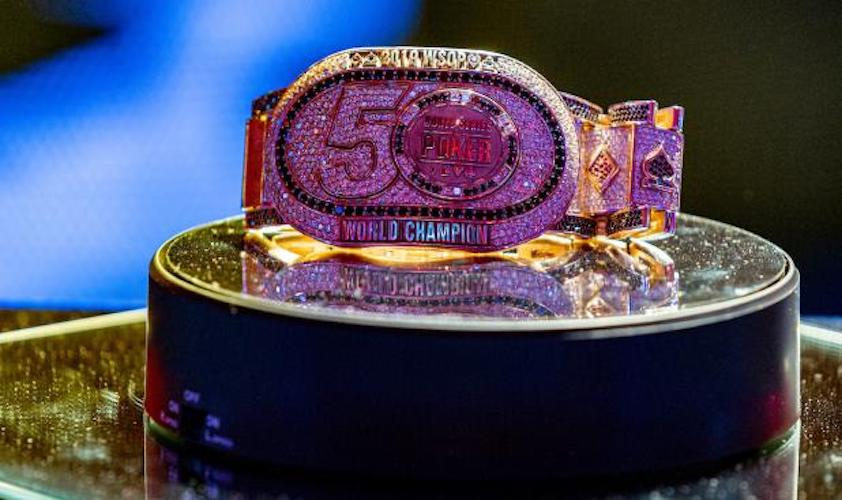 This brought its total weight to 40 carats of gems, making it one of the most precious trophies you can find.

This beautiful
piece of jewelry, alongside the $10 million first prize, went to Hossein Ensan.

In general, WSOP
bracelets are crafted by companies experienced in making high-value jewelry and
sports trophies, like Jostens.

It’s not just
about the value of the materials used but also about making these bracelets
look unique and exquisite.

For over 45 years,
the World Series of Poker has awarded bracelets to the tournament winners. By
this point, bracelets have become synonymous with the WSOP.

It would be very
strange if the organizers decided out of the blue to change this tradition and
start awarding cups or different trophies.

So, for the
foreseeable future, there is no reason to think WSOP bracelets are going
anywhere. 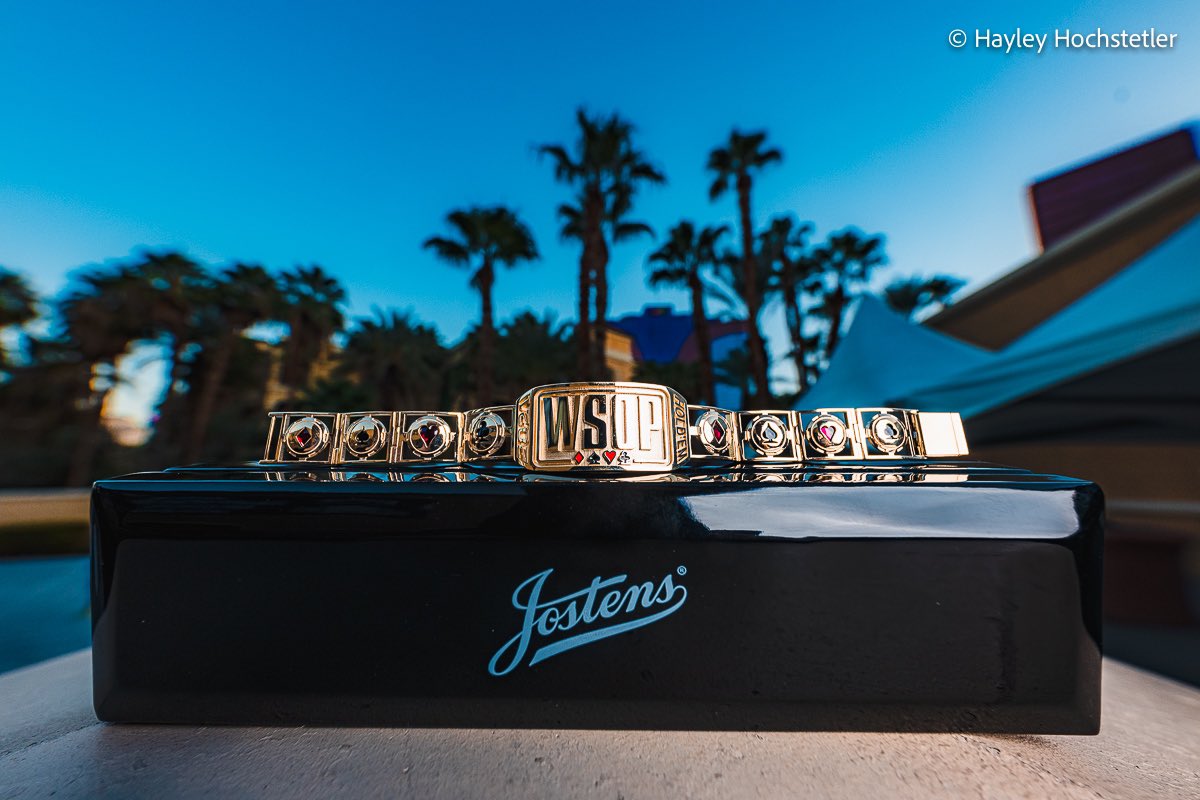 That being said,
there has been some debate about the overall value and prestige that come
attached to these trinkets.

With the number
of WSOP events constantly increasing and the addition of online tournaments,
claiming a World Series bracelet no longer represents the challenge it once
did.

Year after year,
there are more and more bracelets awarded, which has led some professional
players to question the WSOP and their intentions.

The main
objection is that having so many bracelet-awarding events hurts the value of a
bracelet.

If they’re so
easy to come by and you can get one by playing from home in a tournament with
the buy-in of just a couple of hundred dollars, it’ll start to lose its appeal
and prestige.

There is
definitely some weight to this argument, but there’s also the other side of the
coin.

With WSOP
bracelets no longer being so “exclusive” it could serve as an inspiration for
more players to get involved and jump into the action.

What Are WSOP Rings?

Pretty much
everyone who’s been following poker knows about WSOP bracelets. These are
covered quite heavily by the poker media every year, and every bracelet winner
gets at least one article written about them.

But, you may
have also heard about WSOP rings, and this could be a bit confusing.

If there are
already bracelets, what are rings for? Do bracelet winners also get rings, or
how does this work?

The WSOP rings
are actually awarded to winners of an entirely different competition, known as
the WSOP Circuit, or WSOPC.

These are
tournaments with smaller buy-ins that take place all over the United States,
Europe, and other parts of the world.

Although the
competition is organized by the same company, WSOP rings and WSOP bracelets
don’t have much in common.

These are
trophies awarded for completely different tournaments.

The WSOP Circuit
isn’t nearly as prestigious as the World Series of Poker, but winning a ring or
two is still quite an accomplishment.

In fact, the
competition in WSOPC tournaments is often much harsher than what you’ll
encounter at the actual World Series, as these events attract many serious
players who play poker for a living.

This article
pretty much covers everything you need to know about WSOP bracelets.

These coveted
pieces of poker jewelry certainly have quite a bit of history behind them and
are something that many poker players and fans are interested in.

It’s hard to say
how much a WSOP bracelet is actually worth, as numerous aspects come into it.

At the end of
the day, a WSOP bracelet will always have a different value for different
people beyond its actual market value.

For some, it’s a
valuable piece of memory and proof of their poker abilities.

For others, it’s just a piece of metal with no sentimental value to it – and that’s just how it is.