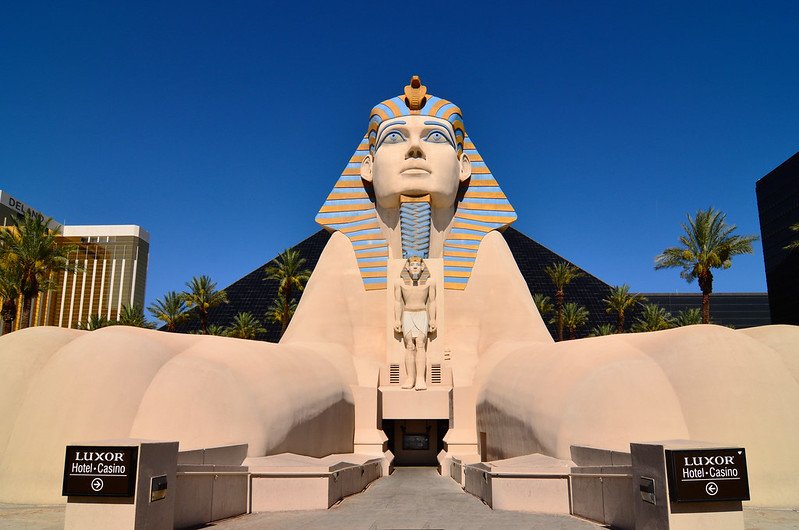 Las
Vegas is a city that is full of incredible stories of legend.

This
is certainly the case when it comes to the Luxor, where it is believed that an
eerily high number of deaths have taken place at the venue, resulting in a huge
amount of paranormal activity.

Let’s take a look at its history to find out how it got dubbed the most haunted casino hotel in Sin City.

Destined To Be Doomed From Day One?

The
iconic pyramid-shaped casino resort has a notorious reputation for being linked
with numerous suspicious and untimely deaths.

Many
guests that have chosen to stay at the 4,407 room Egyptian-themed resort have
frequently shared their experiences of ghostly events.

If you take a look
at the history of the venue it’s not surprising that there are so many claims
of haunted sightings within the property.

The impressive building, which is one of the world’s largest hotels and the 4th largest pyramid, opened in 1993 and took only 18 months and $375 million to build.

It is thought that
several construction workers died during the building process, with conspiracy
theorists suggesting that the management kept these deaths under
wraps to save the reputation of the resort.

There are also some
who argue that the Luxor was doomed to be haunted before it was even built, simply
because it is designed like an Ancient Egyptian tomb – a sure fire way to upset
the spirits.

Many suggest that the Luxor’s
haunting has increased since the hotel opened a Titanic themed exhibition in
2008.

The exhibition contains parts of the
doomed ship and personal items belonging to many of those who lost their lives
in the tragedy.

A History Of Tragic Deaths 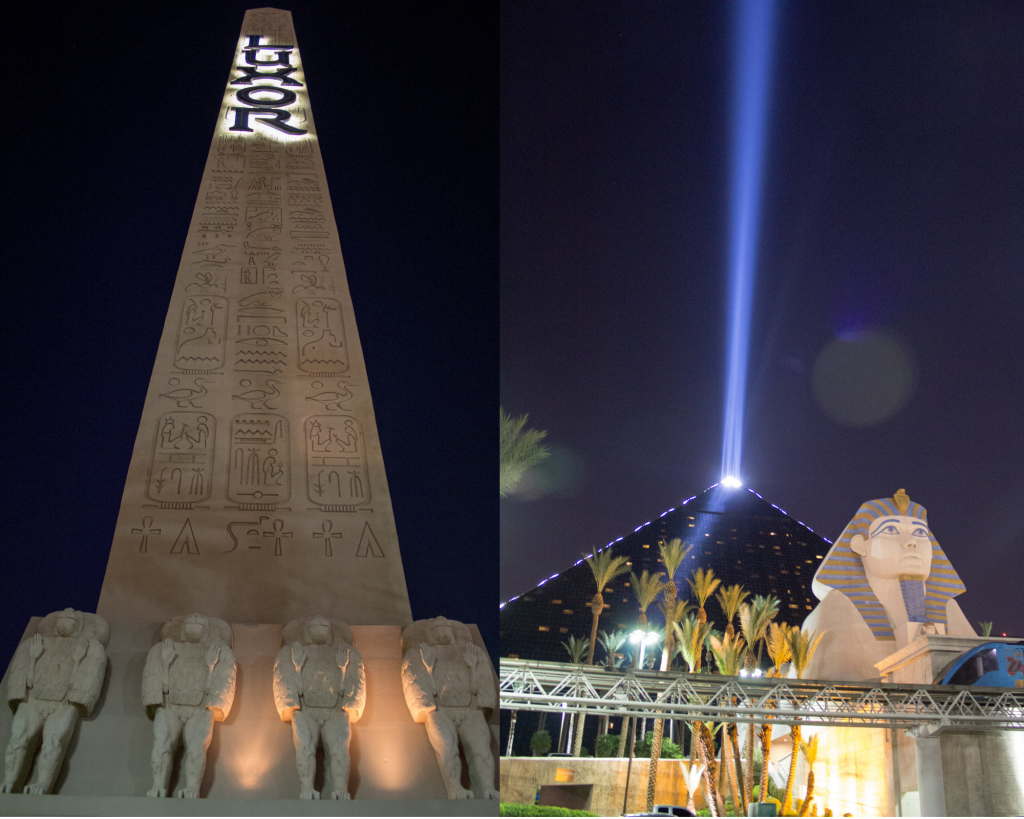 In Las Vegas hotels
deaths are not exactly uncommon.

Approximately 1,100
visitors die every year in Sin City with the majority being from natural
causes.

However, 15% of all deaths are suicides, 11% homicides, and an eery 6% go completely unexplained.

Nearly all of these deaths will not be reported on because the whole of Las Vegas knows that bad news can affect tourism and reduce the city’s profits.

As such, there is little proof of the many deaths that have occurred at the Luxor.

However, even
without these unreported deaths it is clear something strange is happening
inside that famous black pyramid.

The Luxor’s first
reported death occurred in 1996 when a lady jumped from the 26th floor of the
hotel.

At the Luxor,
suicides of this nature are made extra grisly because the pyramid shape of the
building means those leaping to their deaths do so from indoor balconies.

This means instead of
the street they land in the building’s atrium amongst the other guests.

Another guest is also believed to have fallen to his death, this time from the 10th floor.

The circumstances around his death remain a mystery but there was no evidence to suggest his fall was voluntary.

The Luxor has also seen deaths from many other causes.

These have included strangulation, as was the case in the assault, robbery, and murder of a 16-year-old woman by the name of Sara Gruber.

But perhaps the most alarming means of murder came in 2007 when a casino worker, 24-year-old Willebaldo Dorante Antonio, was killed by a home-made explosive device in a plot that Newsweek compared to the hit TV show CSI.

The bomb was set
under a plastic cup that had been left turned upside down on the top of his
car.

When Antonio turned
the cup over the explosion was triggered, ripping a hole in the car’s roof and
killing him. The casino was not evacuated, and it continued to run as
normal.

Three years later,
the highest profile death took place at the resort. UNLV football player
Demario Reynolds got into a fight with another guest, Jason Simon Sindelar, over
his partner.

Sindelar was an MMA
fighter and struck a devastating blow to Reynolds, who then fell unconscious
after hitting the floor and never woke again.

In
2010 a court ruled that Reynolds had died from an overdose and not from the
fight.

2012 saw the next
death – a casino employee was murdered by their boyfriend in full view of the
public in the lobby, scarring those who witnessed the murder.

The same year, a
case of Legionnaires’ disease took another victim at the hotel. Two cases had
been identified previously, with the water being treated both times.

However, this third
case was not picked up quickly enough because tests on the water came back
negative until just after the victim’s death. Creepy.

A third bizarre death took place that year when an airman visiting from Nellis Air Force Base mysteriously fell 25 feet down an elevator shaft.

Once again, no evidence suggested that the victim’s fall was intentional. 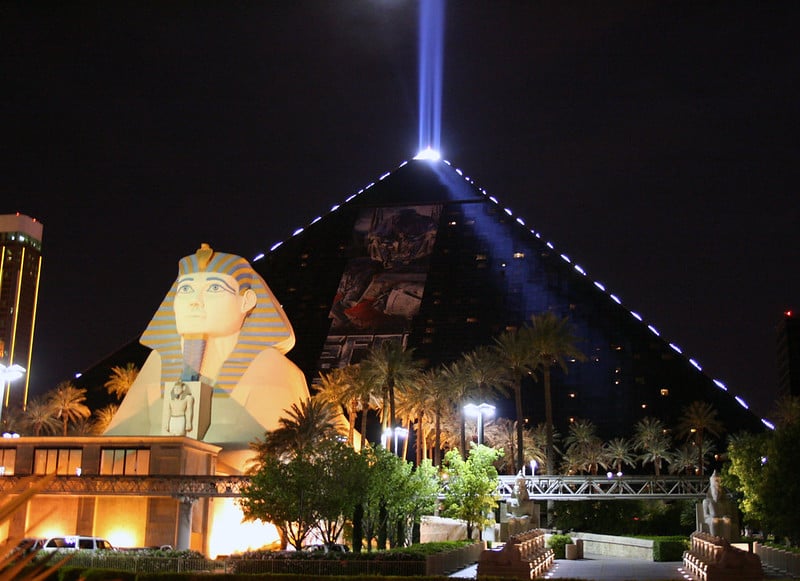 With so many deaths
occurring at the Luxor over the 29 years it has been open, it’s no wonder that
guests report seeing and meeting many ghosts.

But who are they?

The most common ghost guests report seeing at the Luxor is a mysterious blonde lady who is often seen in bedrooms on the Luxor’s 12th floor.

Guests sleeping in these rooms have been known to wake up fighting for breath and feeling as if they were being choked.

Others report catching glimpses of the woman standing over their bed or feeling a phantom hand running across their face.

I had a VERY WEIRD experience when I was staying at the Luxor hotel in Vegas for EVO once. I don’t even believe in ghosts/spirits, but every other “logical” explanation literally does not fit what happened. Not even close.

The hushed-up deaths of several workers during the building’s construction in the 1990s has reportedly led to the appearance of many ghosts.

These were most commonly seen on the dark banks and tunnels of the hotel’s old ‘Nile River Tour’ an attraction where guests were ferried to different parts of the pyramid by boat.

Many have suggested that the sight of so many ghosts was one of the main reasons the Luxor demolished the river tour during later renovations.

@SedanoESPN never believed in ghosts until I stayed at the Luxor in Las Vegas. I had to leave after the first night.

The Luxor’s exhibition on the Titanic includes over 300 artifacts recovered from the bottom of the ocean. Many of these items are extremely personal including clothing, purses, and glasses.

Whilst interesting to look at there have been tons of reports of the item’s original owners coming back to haunt the exhibition, including a shadowy figure who has frequently been seen standing on a near-perfect replica of the doomed ship’s grand staircase.

Other guests have also caught glimpses of one of the Titanic’s lookouts, Frederick Fleet, who committed suicide in 1965.

He stands on the exhibition’s Promenade deck peering out into the gloom, searching for the fateful iceberg.

One of the most haunted Exhibitions is Titanic: The Artifact Exhibition at The Luxor Hotel and Casino in Las Vegas.

Paranormal activity inside Titanic: The Artifact Exhibition at The Luxor has ranged from feeling as if someone is following you to actual ghost sightings.

Is The Luxor Cursed?

As mentioned, there
are a number of theories about why so many suspicious deaths have been recorded
at the Luxor over the years.

The fact that the
resort has endured such trauma even though its construction was only completed
in 1993, is quite frightening.

The most popular theory relates to the actual design of the resort.

The Luxor takes its
name from the Egyptian city of the same name. The whole premise behind its
design was to build a venue that truly encapsulated the heart and spirit of
Ancient Egypt.

Unfortunately, the Luxor is not a completely accurate copy of Ancient Egyptian pyramids.

For example, it is
believed that pyramids in Ancient Egypt required a Sphinx to be facing both
East and West so that the pyramid was protected from evil on both sides.

The Luxor pyramid only has one Sphinx facing East, potentially leaving it exposed to evil spirits. 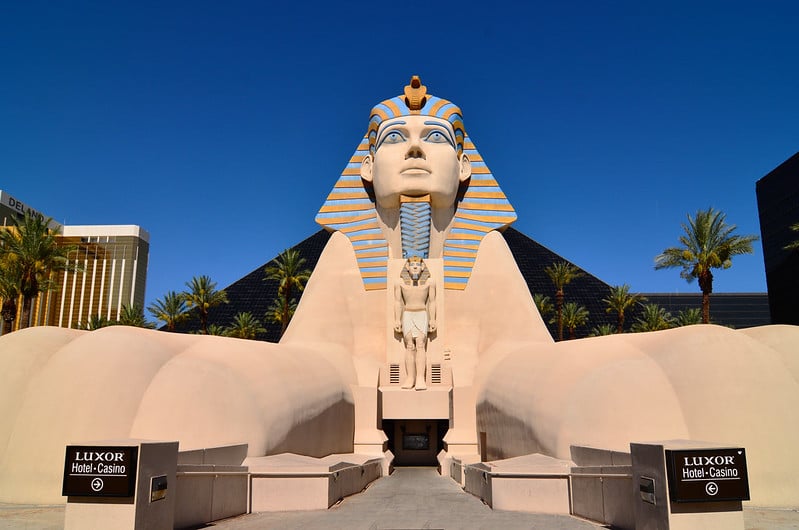 People also forget
that Egyptian pyramids are actually tombs built on the West side of the river
Nile. This is the side where the sun sets and where Ancient Egyptians believed
the newly dead entered the underworld.

It just so happens that the Luxor is built on the West side of the Las Vegas strip.

A spooky coincidence that might just explain why so many visitors to Sin City have lost their lives in this hotel.

Others believe that
the untimely death of the construction workers has kickstarted a chain of
hauntings.

These have led to
more deaths occurring and therefore more ghosts appearing. The opening of the
Titanic exhibition in 2008 has only added fuel to this already very spooky
fire.

Another urban legend suggests that after a string of coincidental deaths took place at the resort, local mobsters had a prime opportunity to use the venue as a location to bump off their victims.

After all, who would
suspect a thing when people are more willing to believe the existence of a
curse?

Finally, it could
simply be a sinister run of bad luck for the resort. Las Vegas is all about those
hot and cold streaks.

Maybe the Luxor is
just experiencing a prolonged run of people being killed on the property
grounds.

Whatever you
believe, sooner or later their luck has got to turn around. Right?

Want to know more about Luxor Las Vegas besides its ghoulish goings on? Check out our piece on its skybeam that has its own ecosystem.